At the First Glance

This website’s information is NOT New Age. Nor is it religious. My large book titled Eternal Humans and the Finite Gods provides balanced and substantial information about Judeo-Christianity (with ample Bible passages), similar religions, New Age beliefs, and exopolitics. I work to determine whether otherworldly information is scientifically and realistically valid. My second book, Proposing a “New” Cosmology Beyond Death Science, delves more deeply into physical cosmology paradigms for people wanting a science-based focus. I push many boundaries, so please do not be quick to judge my work that you do not yet understand. Some of what I reveal is brand new to the public. 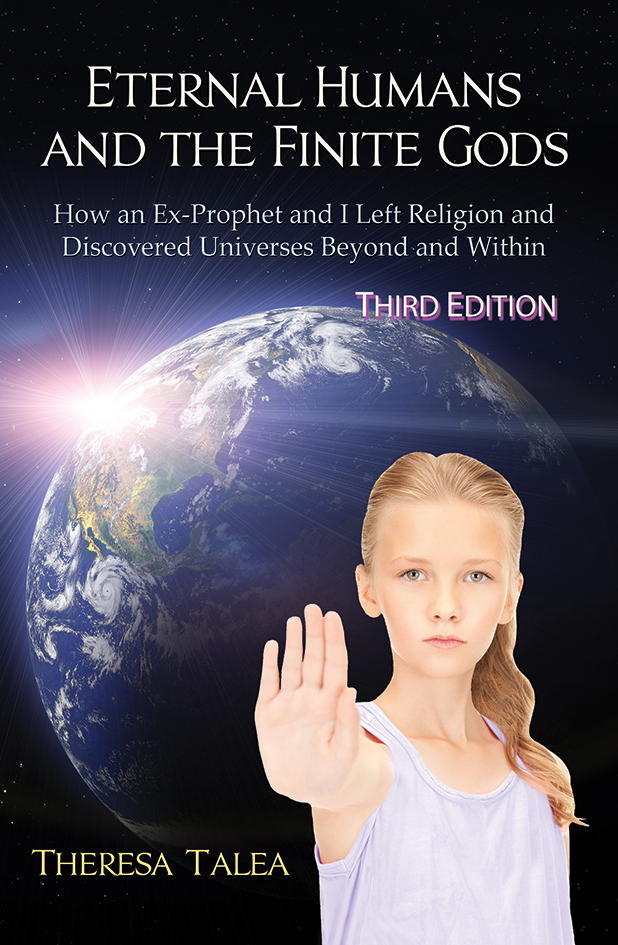 Eternal Humans and the Finite Gods:
How an Ex-Prophet and I Left Religion and
Discovered Universes Beyond and Within

This expanded and detailed book is now available!

You may read the Table of Contents, Introduction, and Chapter 1 in the new, third edition.

Please go to the Orders page to purchase the softcover book.

*Book descriptions are shown below in the next section* 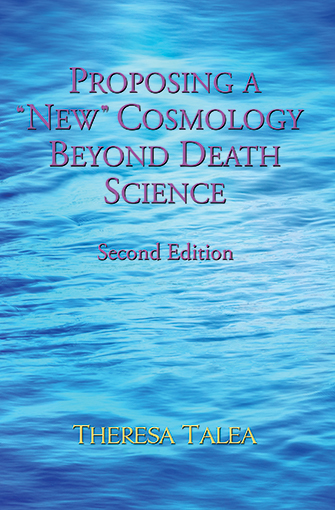 This book significantly expounds upon chapter 6 in the second edition of Eternal Humans and the Finite Gods to provide a succinct and clear presentation of cosmological paradigms. Most of its information is included in the third edition, but it is a complete book tailored to the scientific community and skeptical public. Its 98 page size makes it easy to disseminate and discuss among peers.

Please go to the Orders page to purchase the softcover book.

The third edition of Eternal Humans and the Finite Gods is a comprehensive book that brings the reader into journeys within oneself and beyond. It introduces a mother and daughter who genuinely desire truth, and they first utilized religion to find it. What should have been a path of awakening had taken them down a rabbit hole of diminished choice, knowledge, and freedom. This culminated in Talea’s mother being used as a tool to spread the “truth” via prophecies she received, and Talea was being groomed toward a similar path. It took great effort and insight to climb out of that hole and stop the manipulation, which Talea shows in her realizations step-by-step.

Popular books derived from otherworldly sources rarely if ever critique the gods or angelic guides of those messages. If criticism is found, people often turn to another religion ruled by similar entities. Talea’s book is unique in that she not only analyzes her mother’s prophecies, the Bible’s, and various other sources, but she also brings us outside of mainstream spiritual beliefs to a more complete picture. Figuring out who was spiritually directing Talea and her mother and the reason why were pivotal steps to gaining back themselves. They have learned how to separate truths from lies, which religions and New Age spiritualities are notorious in combining.

Research into the roots of Judeo-Christianity shows notable evidence in Egypt, Sumer, Anatolia (pre-Turkey), and Greece. Talea uncovers historical and sometimes otherworldly identities of Judaism’s patriarchs and Christianity’s demigods, and she uses archaeological and cultural evidence as support. The transition from Judaism to Christianity was feasible because their mainly similar factions interweave almost seamlessly—along with purposeful division—due to a greater agenda. Theories about an Apocalypse and a New Earth are key topics for our current time, and real-world politics play a prevalent role toward a one world order “under God.”

Talea argues that science and religion share multiple similarities, especially in relation to scientific ideas hindered by fractals and quantum mechanics. Is there really a realm based upon eternal life without death and reincarnation? She says “Yes,” showing how she came to that conclusion with investigation into theories about other dimensions and universes.

This third and final edition goes where few books have ventured—revealing rational explanations for abstract concepts such as a higher self, transfiguration and ascension, “pole shifts,” and the expansion of the cosmos contrary to the religiosity and unrealism perceived in the New Age community. Talea seeks knowledge toward the very beginning of existence; she invites the reader to stretch one’s mind and see how our physical reality emerged from a much larger system whose foundation is neither chaos nor a God.

Finally, Talea expounds upon key aspects of one’s wonderfully multifaceted self, which includes layers of energy “matter” that we can individually experience. With the extraordinary knowledge presented in this book, we can arguably gain more security and sense of self to empower us more than any prevalent religion or spirituality can. We have more abilities and choices than what we have been led to believe, and we can choose our own paths in life, including the afterlife, which this book also explores.

The second edition of Proposing a “New” Cosmology Beyond Death Science probes into how prominent theories of physical cosmology intermix with religious ideologies, especially New Age teachings, in their definitions of a cosmological origin. While science and religion tend to dismiss one another, they both commonly oversimplify an origin of creation as an all-in-one entity able to create an entire universe or cosmos from within itself as a respective “big bang.”

As this is largely a conceptual book, it briefly explores the Big Bang theory, fractals, special and general relativity, M-theory, the Higgs boson and field, multiple dimensions and universes, and more in order to gain a basic but workable model of creation organizing the levels of interplay and similarity between waves, particles, and fields. This model extends to undiscovered or “new science” spaces of energy we can sense and somewhat understand when we explore beyond currently established boundaries.

Ultimately, or rather foundationally, this model arrives at the source before creation, which is not a zero-point or field because it does not contain any universal component. If we apply a loose correlation to our respective energies, this source is most similar to a nonreactive, pre-hydrogen-like, pre-gaseous essence. This distinct, pure essence is conscious, and it can extend its awareness to all living beings through the core aspect of our compositional templates and DNA.

The primary theme posits that living consciousness and eternal energy substances precede the creation of “death science” based on decay. Our immediate galaxy and universe are a struggling system that could not exist without an eternal foundation in a vast cosmology.


Please donate as a "thank you" for this website's information.